What's on the workbench right now.....

Well I decided to take this project that was started from an AHM C628 and a safety cab and turn it into something bizarre.  It's going to be my M650 project....

So here is where it's at along side a GP38-2 that is getting close to complete... 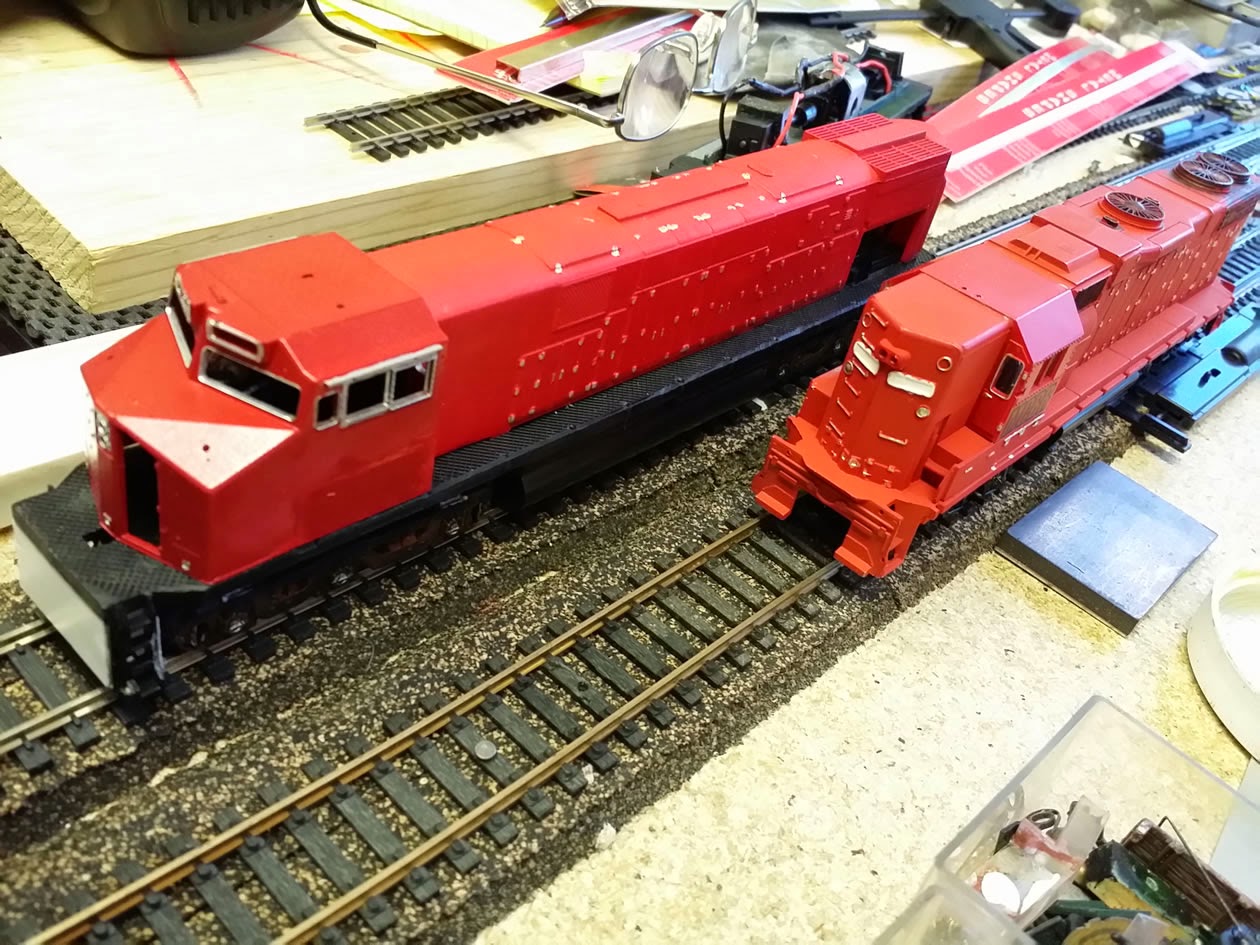 That's the state it's in right now.  It has 1 minor operating problem right now in that it derails going forward through a #4 switch.  I know the cause and will fix it tomorrow....here's how it evolved... this is the finished wiring after the total rebuild...NOTE that I don't have DCC, I'm still deciding on that one, but this setup is prepared to accept DCC with plenty of room to spare. 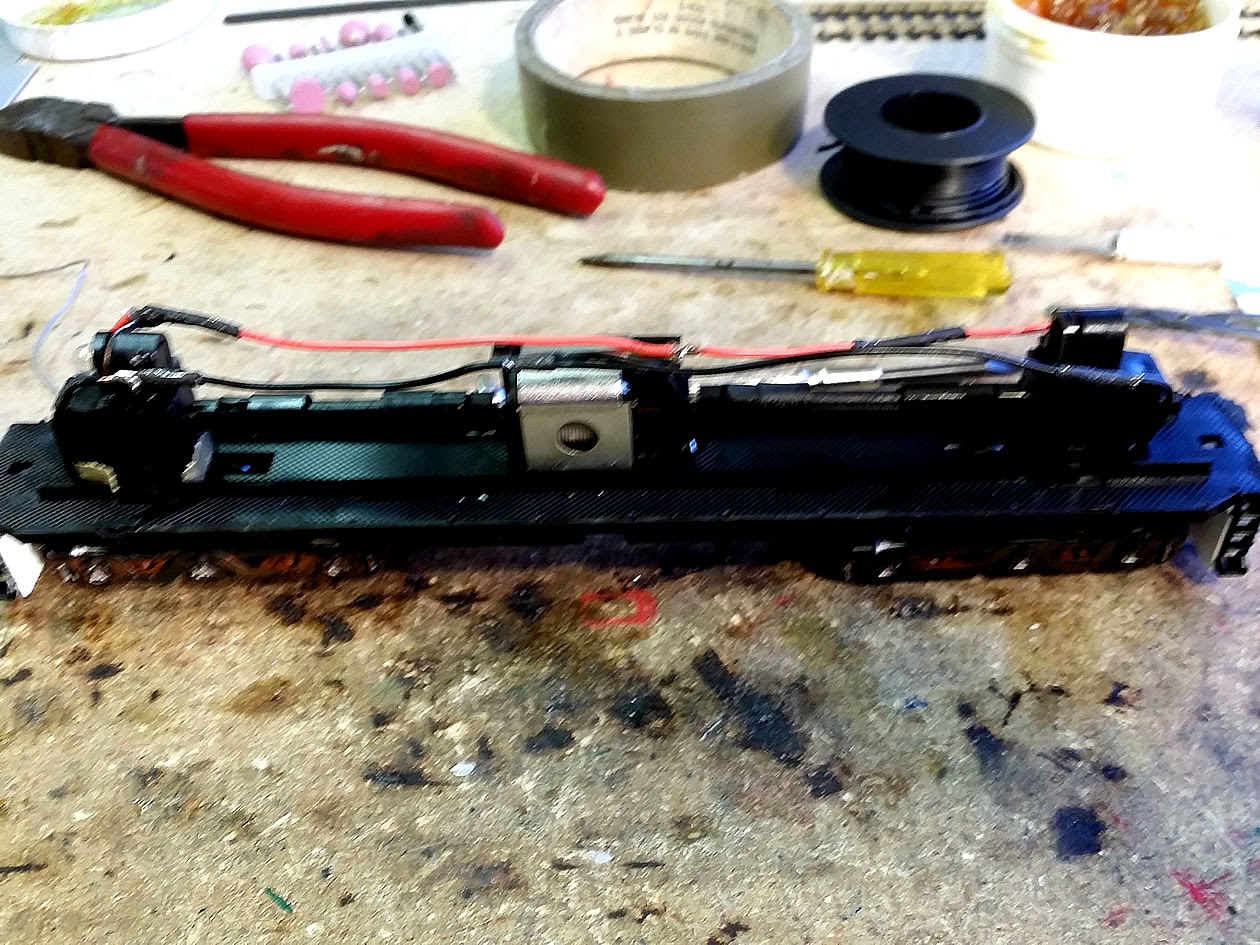 Here's how the wiring basic part was done: 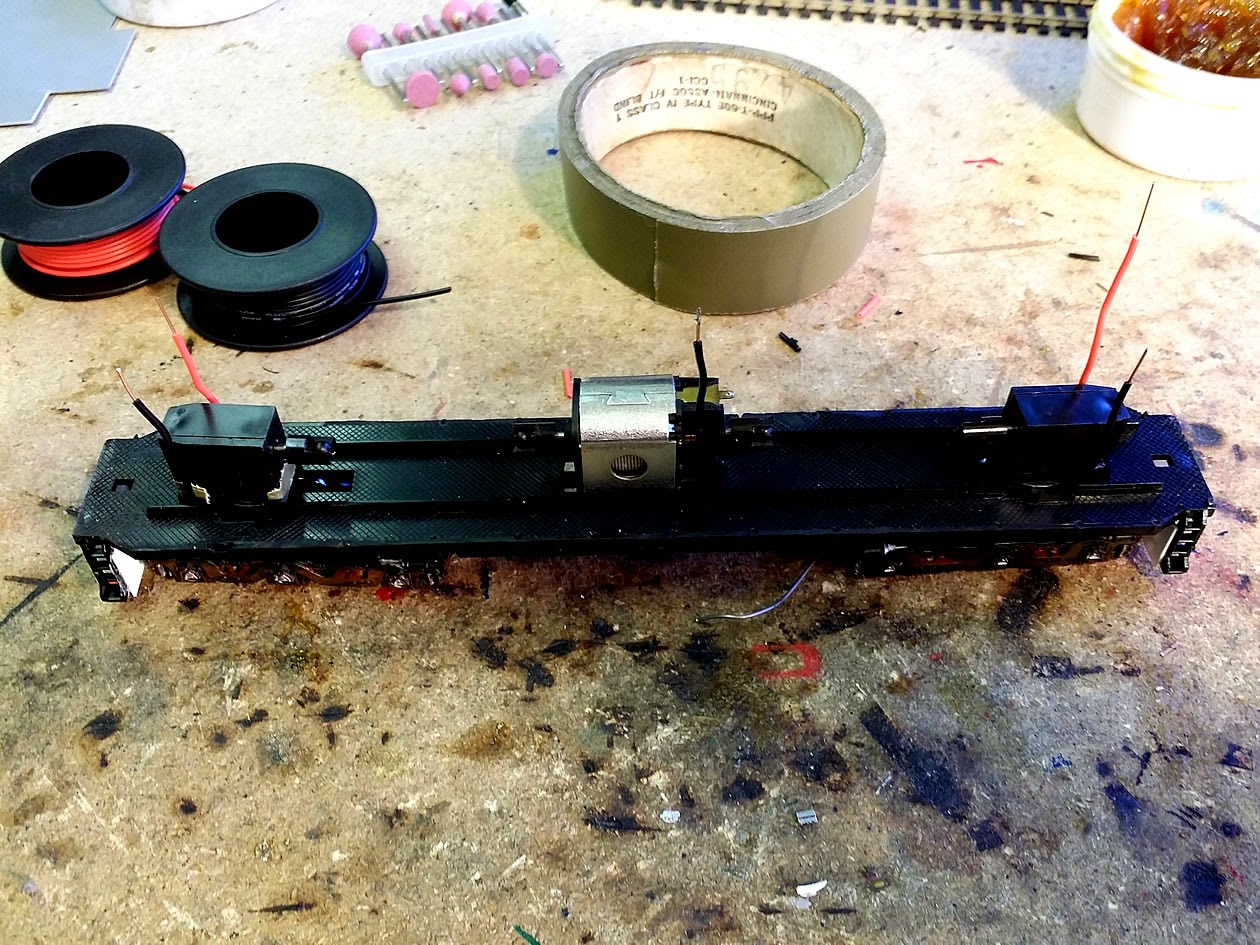 Here's the motor and 1 truck 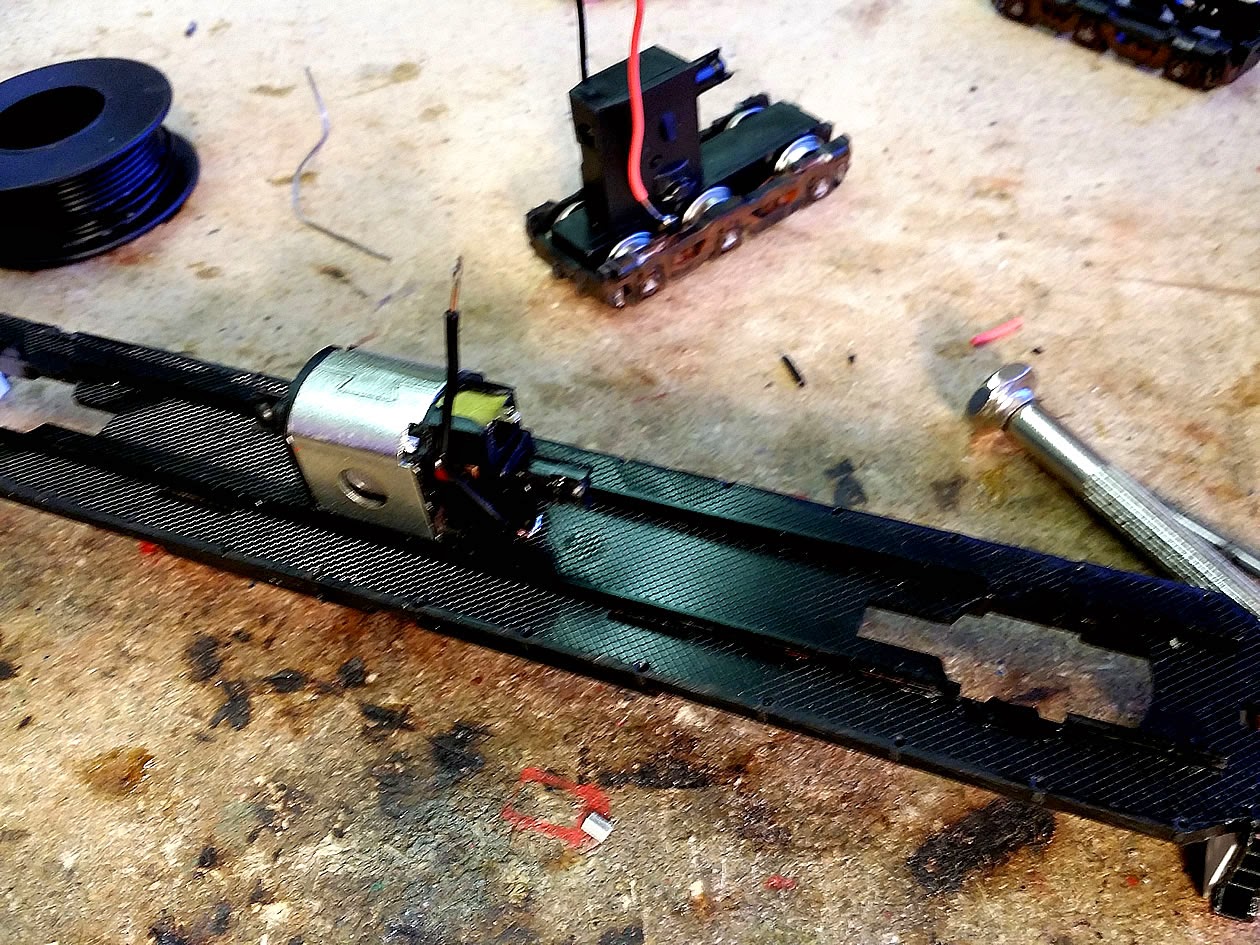 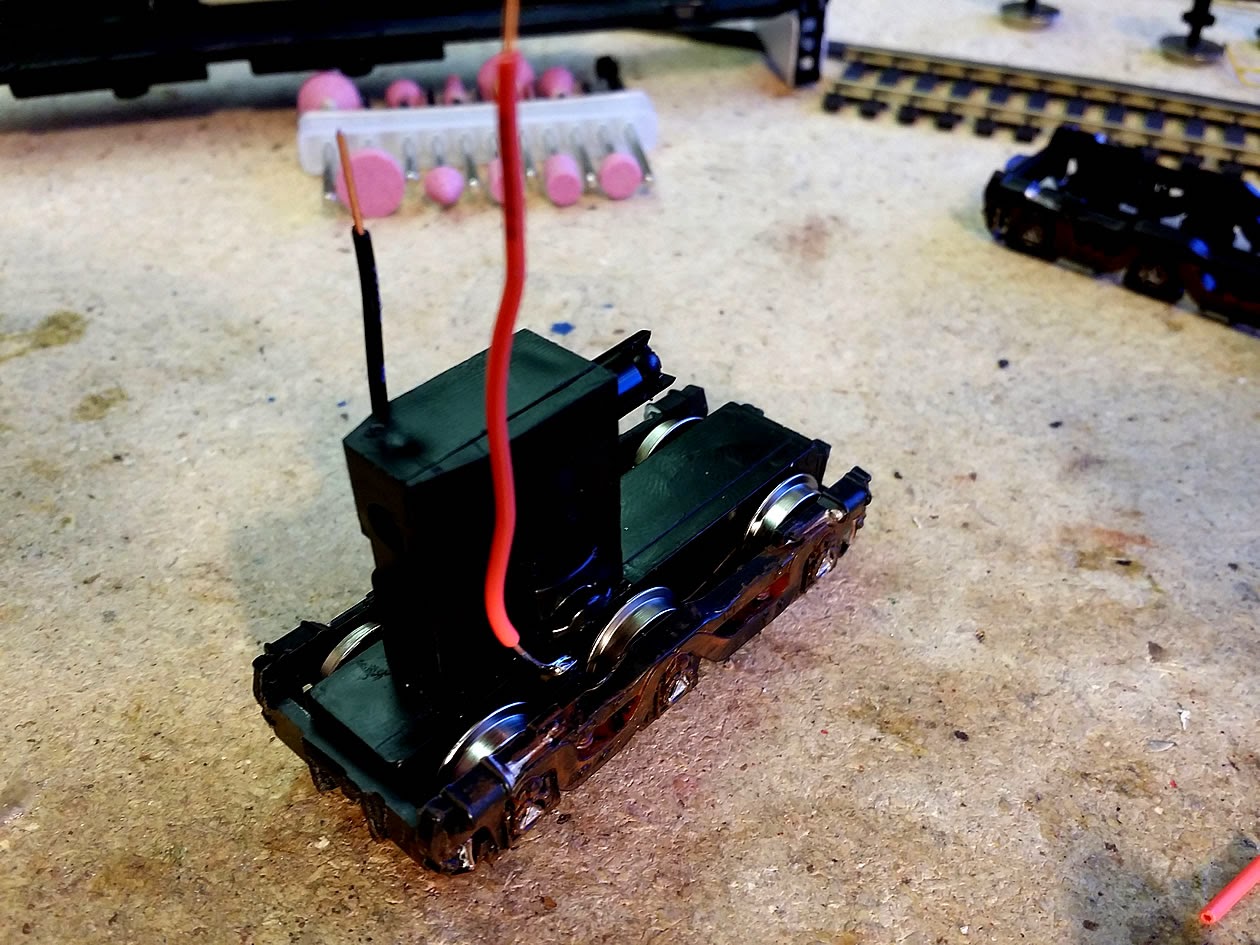 Now as you can see I like stiff wire.  Yes it is tricky to get it to move freely and not bind up stuff, but the solid core wire is worth it in that I only need to move the power up to 15 on my Tech II bench power supply instead of the 25 that it normally takes for these AHM motors.

Why do I mess around with stuff like this and pancake motors and old Tyco motors?  Because I like it and I can do whatever I want with worrying about wrecking some part of a $250 locomotive.  I like fabrication and scratchbuilding, rather than investing lots of money into something that's too expensive to touch.

I have over 150 locomotives, mostly Athearn Blue Box from the 80's and early 90's.  I also have lots of AHM, Bachmann and Life-Like that have been heavily bashed.  But the thing is - at any given time I only have around 10 locomotives that are down for maintenance and around 5 in my salvage bin.

Slowly but surely I'm getting all of them ready for DCC... but what system to get still baffles me...here are my requirements:

1.  MUST be wireless network, and I don't mean radio or infrared.  I mean standard 100mb wireless.
2.  I will be using smartphone apps as throttles.
3.  I will be managing my system with a dedicated computer network - I've got plenty of extra computers
4.  must support 100+ locomotives, not run them all at once, but they will be parked on a siding somewhere
5.  must do very well with consists
6.  locomotive number will be used as the address
7.  must be a system that has built in future upgrading - I'm not buying old technology or stagnant tech