The question on a Facebook group was "How does the line from Vesta MN to Burt IA tie into the Fairmont Subdivision on the CNW?"

I remember an issue from the 1990's of the Northwestern Lines dedicated to the Fairmont Sub...but I don't have it handy, so once I pull it out of my archives we can see what it said.

Using http://www.openrailwaymap.org/ I checked the status of the rails to confirm that the track at Vesta had been razed, probably a very long time ago.

In CNW System Timetable 1 from 1972, the track at Vesta runs to Wabasso and then west to Marshall.  Sometime before 1972 the line from Vesta ran to Butterfield, which would have made it part of the Fairmont Sub.

At Fox Lake MN that line continued to Burt IA and on to Algona.  The CNW Burt Sub ran from Eagle Grove to Ledyard, but at Burt Yard limits were in effect all the way to Ledyard in 1972. In 1981,according to CNW System Timetable 5,  the Burt Sub ended at Bancroft.

Today, using Google Earth Pro with the railway overlay turned on, you can see the line ends south of Bancroft where the river bridge was taken out and is now used for the storage of grain cars.  OpenRailway shows this as the Jewell Sub of the Union Pacific.

You can still see the roadbed for the tracks that ran from Burt to Fox Lake.

What we need to do is fill in the blanks from Vesta to Burt and then figure out how that line tied into the Fairmont Sub at Fox Lake....

We also need to tie in the Chicago Milwaukee and Omaha sub that ran from Lake Crystal MN to Burt IA.

So here's our first working map: 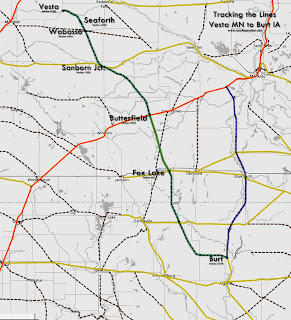 Next up, we'll consult the timetables....
Posted by Train Fixxer at 8:20 AM No comments: