I've been looking at this thing on ebay for quite a while now.  I don't have any experience with milling machines, but I'm not getting any younger and the accuracy of freehanding a moto tool is getting worse.

I didn't want to spend a lot of money on a machine when I don't really know how they actually operate.  That's when I discovered the Zhouyu Machine.  It's a learning toy basically, and since I'm just learning, for less than $200 I could at least get an education.

The very few reviews and comments I could find about this machine are almost all totally negative, but have essentially the same reason:  not suitable to machine metal.  Since I work with plastic, I decided to dig deeper.  I found a video on youtube, that I didn't bookmark, that showed a guy setting this thing up into all of its different configurations and testing them.  He didn't have any negative comments and he understood this is not a machine for working metal.

Then he said something that stuck with me....the machine comes with tool blanks that you use to create your own custom tools.  I then talked to an old school machinist and asked him what he thought.  He told me that since it's a kit, the best course of action would be to use the machine to create improved components.  This seemed like a genius idea and I went ahead and bought it from prettyworthshop on ebay.

Here is the picture of the box: 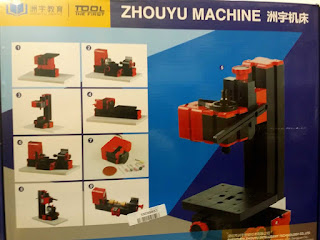 The machine is super simple to put together.  Once you know how everything attaches it's a simple matter to configure the machine into any of models shown.  I even configured it to something not shown and it worked just fine.

Here are the component storage bins: 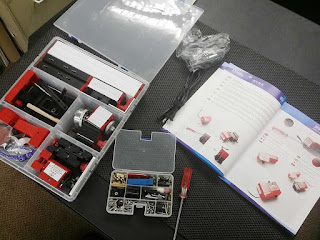 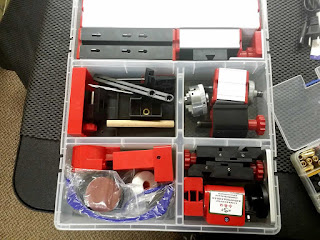 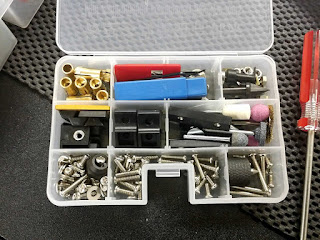 The first thing I made was the vertical mill.  I wanted to see if the machine was better than my freehand sawing. 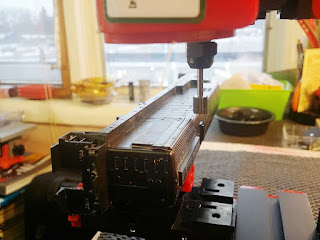 So this was my first experience using a vertical mill.  I wanted to remove the grill from the top of an Athearn Blue Box U28C.  The vise is plastic and much too small for a piece this big.  Needless to say the accuracy wasn't that good.  But the solution to that problem is simply a better vise.  Also being plastic, the torque of the tool can push the piece out of alignment easily.  I did find that setting the depth of the cut is very important for accuracy, something that would have been obvious to an experienced machinist.  My depth had too much tool engaged at one time.  When I backed off, the accuracy improved considerably.

Since the speed is slower than a moto tool, there is a lot less melting during the cut, which I really liked.  To finish my cut I used a razor saw cutoff wheel and that made a huge difference.  The razor saw had no melting and the cut was very accurate.

A drawback is the short travel distance.  The vise has a wheel to move it an inch or two and the rail will allow you to move the vise several inches.

I placed the machine on top of some tool box liner that held it in place very well.  There isn't a lot of weight to hold it in place, but the liner is a bit sticky and held it nicely.

The next step for me is to build a better vise and give it more travelling distance.  Since every part is replaceable I don't think it will be much trouble to make something bigger.  Also, it's a simple matter to bolt the machine to the bench, which I haven't done, but that would increase accuracy quite a bit.

The machine has several collars so any dremel bit will fit this thing just fine.