Use LED lighting quick and dirty simple step by step

Explaining how to use the Light Emitting Diode

Quick & Dirty Guide to LED's...
Using your power pack, you can connect the DC or AC or Track Power DC to a string of LED's and get them to work reliably.
Make an LED Ring Tool so you don't have to memorize how to do LED's and have a tester for brightness.
We're going to keep it as simple as possible. If you can get these things, you can light up your LED's in a matter of minutes.
Tools needed:
1. Solder Pencil/Iron/Gun - a simple $10 solder pencil from the auto parts store (or Home Depot, Lowes, Menards) will work for most things you do.
2. Solder - electrical rosin core is what I use (Home Depot, Lowes, Menards) about $4
3. Rosin Soldering Flux Paste - I use RadioShack, at Grainger it's $2. You CAN use most kinds of flux, but rosin is best for electrical.
We'll explore different kinds of flux later, for now get what you can to make this project work today.
4. Bridge Rectifier - Radio Shack (if you still have one) or ebay or Amazon. You might luck out and be able to find one at some other store near you. on ebay $7 for 10 600 volt, pretty good deal.
5. 1k resistor - online or some auto parts stores, on ebay 100 1/2watt are $3.48. Sometimes I use 1 watt and sometimes 1/4watt, if you pop an LED, then you know it was the wrong resistor.
6. LED of your choice. Brightness is measured in MCD. I have some that are 700mcd, 7000mcd and superbright at 24000mcd, almost like a surefire flash light. We'll play with brightness later.
We need to make this ring so we can test LED's to see if we like them in our projects.
Once you have a working ring, you can then add new LED's to see how bright they are compared to others that you already know.
Here is a useful note: A 5mm led is just a little too big for an Athearn blue box Trainmaster headlight and a 3mm is too small.
Make the ring:
1. Tin your parts. This is where you pre-solder the parts leads so they are easy to join to another part.
2. Join the "+" lead (which is marked on the bridge rectifier) to the resistor. The GOLD STRIPE IS toward the next part. You are soldering the "+" to the side of the resistor without the gold stripe.
3. Look at the pictures below - inside the LED is a big piece and a little piece, solder the gold stripe side of the resistor to the small side of the LED.
4. Put more LED's in the same direction, small side always points back to the gold stripe.
5. Solder a black wire from the big side of your final LED to the "-" lead on the bridge rectifier.
6. Connect power from you power pack and light them up.
I like yellow for the inside of building and some headlights. You can use the AC accessory on your power pack to do this.
Remember those old power packs you have somewhere? You can use those to light city blocks.
In locomotives without DCC, you can use this LED ring to do you lights. DCC already has circuits that deal with lights, so this isn't for use in that situation.
Passenger cars, EOT - end of train, all that is possible from this.
This is only the beginning. You can get much more complex but adding other things to your ring, but you'll always have an example of the basic working LED. 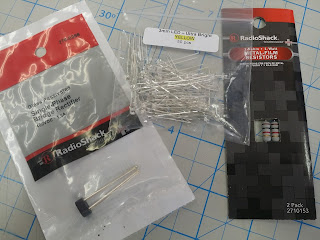 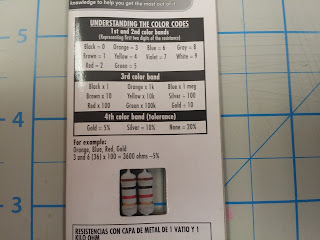 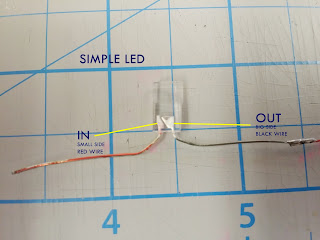 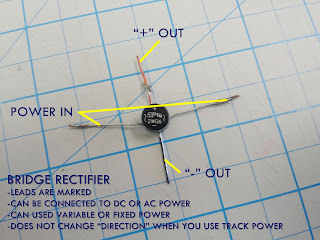 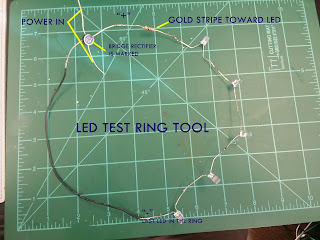