Stripping the paint and making some parts 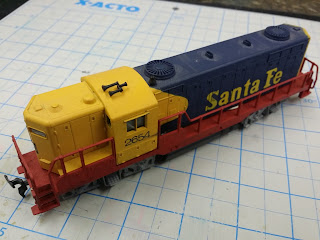 We're going to take an old school AHM GP18 and totally rebuild this guy and make some 3D printed detail parts to pimp out our build.

The AHM GP18 from back in the 1970's was many kid's first locomotive, mine included.  I've always loved this model for that reason.  They are super easy to find for very little money, but have a reputation of being unreliable.

There are 2 reasons for the unreliability.  First, this toy was meant to take abuse at full power being reversed at full speed over and over again.  For that task, this engine was pretty good.  The motor takes a lot of full power abuse.  It wasn't expected that it would be used for slow speed switching with short moves and delicate situations.  The motor likes to get lots of power to get going and stay going.

This leads to the second weakness, power pickup is poor, using small wipers.  The wipers are on alternate sides, so you don't get power from all the wheels.  Dirty wheels and wipers lead to jerky operation and no real slow speed ops to speak of.

We're going to do a real budget build on one of these to include a new motor with good slow speed and low power operation. We'll also fix the power pickup problem.

We're also going to make a couple 3D parts from scratch and handrails from brass wire make this an interesting locomotive.

Hopefully by now you have the skill to tear this thing down to bare bones.  Carefully remove the 3 screws you will find on the underside, 2 by the cab and 1 on the fuel tank and take it apart.  Remove the sideframes and truck clips carefully with a small flat head screwdriver without breaking anything.  Pinch the motor clip from underneath carefully to release the moter.  Cut all the wires since we're rewiring it anyways.

You should be taking pictures before you do stuff so you know how it was in case you need to put it back together, but I'll have pictures and instructions here to help you.

Take apart the trucks without breaking the tabs.  Use very gentle pressure on the plastic tabs and clips to do this.  You might have one that was oiled with something that made the plastic brittle and things break off.  DO NOT PANIC.  We'll deal with broken parts later.

Use Dawn dish soap to wash everything to remove all oil, dirt and grease.  Don't lose any gears down the sink. 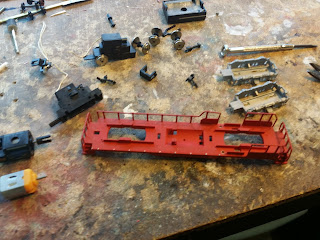 OK, you can see it apart.  That yellow motor is the possible replacement from ebay for about $2.  Don't know if that one will work yet, but we're trying it.  I started cutting off the handrails.  There are side pieces that will be glued to the shell.  They are removed by gently scoring the line where they meet the frame many times with a knife.  After each score, bend slightly back and they will eventually come off nicely.

We'll go in depth on the gears in another part, for now we want to strip the paint.

This paint is tough to remove, so I used the EZ strip method from the previous blog post.  Go review the 5 methods before stripping the paint.  On this particular shell, the yellow is very tough to remove, so EZ strip was the way that worked.  There were 2 spots where I left the stripper in place for about 5 mins and it started to melt the plastic.

DO NOT USE EZ STRIP ON THE FRAME.  It melted a section of the walkway right away.  The rubbing alcohol method works on the frame, but it takes 2 days or a little more. 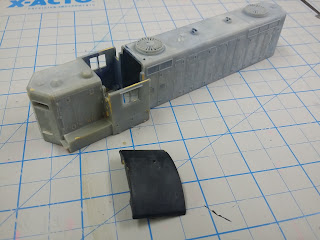 I'm going to make some beefed up fans and exhaust mufflers using the 3D printer.  We'll save that for another part of this project.  At this point I glued on 2 of the battery box covers I cut off the frame, but the 3rd piece has nothing to attach, so we'll make something to glue it a little later.

We'll get to the paint in another part, so at this point you should have your shell ready for painting.  Make sure to wash it with both the tooth brush and a soft cloth with soap to get all the stripper off.