Getting ready to rebuild the body


Now that the motor and frame are working, we can turn our attention to the body.  If you remember the photo of the original, this is what we were working with: 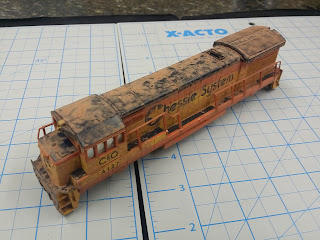 Yes, that is dried pottery clay that was used for weathering.  In addition to being actually weathered and beaten up thoroughly, this locomotive was in rough shape.  But, as a testament to it's actual toughness, it's really starting to turn into something extra special...

First thing I did with this shell was put it in the icky box, as we call the 5 gallon tub of 8.7% pine oil.  If you plan to make your own icky box, make sure it has a decent lid and then throw a bath towel over it to keep the smell of pine contained to the box.  I generally have a number a future projects in the box for long periods of time.

Since there have been so many beginners shut down on various forums recently, I decided to pull this project out and do this tutorial.  Like I said before, this is a great place to learn and many of you have these locomotives from your very first train set.  So let's get that paint off: 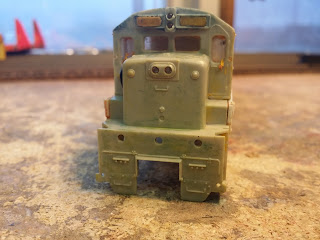 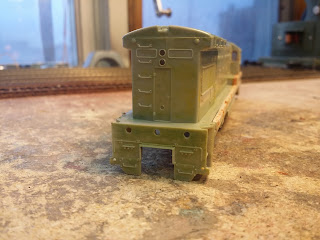 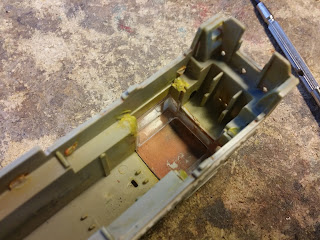 You can see that I removed the handrails, actually just broke them off.  They were in bad shape and I said we'd make our own handrails anyways.

I'm going to install a homemade anti-climber.  It's not going to look prototype in any way, but it won't stand out that much and it will give a lot of structural strength to the front end.  I'm going to use some plastruct channel that cost about a $1 for enough to do around 10 locomotives.

Another thing that I can't say enough is that you must use the correct glue.  When joining plastics, especially different kinds to each other there are 2 choices.  Super Glue or Epoxy.  Do not use Testor's Orange Tube glue to join different kinds of plastic, it doesn't work - that glue is for joining the same plastics to each other.

So I sanded the pilot flat using my combination belt and disk sander from Harbor Freight and filed the L channels just a bit and joined them with a bit of super glue.  If I needed more working time, epoxy would have been the way to go. 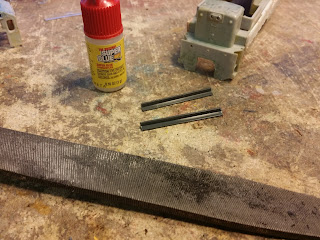 Don't worry about measuring them.... 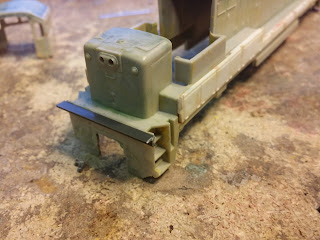 Now I can insert my short rant about tools from Harbor Freight.  A lot of them get terrible reviews because a guy spends $50 on a tool and tries to mill hardened steel or aluminum and it fails.  I have several machines from there and I use them on model trains which generally are plastics that sand, drill and shape nicely.....

So using the disc sander I just shaped the anti-climber using my Mark I eyeball. 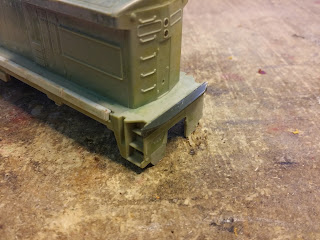 I'm not doing any putty work or filling anything.  I'm also not doing wire grab irons or other details.  This is supposed to be an easy build, not a super detail build.  Next I did a super light coat of fast drying white primer and put the heat lamp on it.  In 15 minutes it was ready to start painting. 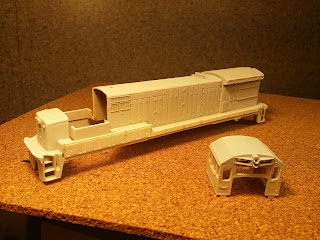 I spray painted the cab just because that red takes a while to bake and dry.  I airbrushed the satin black section with some acrylic paint I got at walmart for $3.  That little can will last a couple years.  I cut the acrylic with about 2/3 91% alcohol and I spray at 100psi.  Some guys paint at 10psi, others at 25, but I paint at 100psi because I can.  That doesn't mean you should. 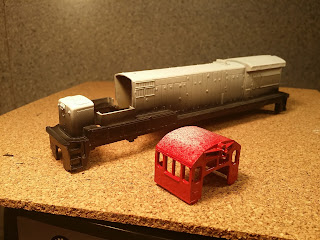 While the cab is baking, and after about 45 minutes of drying time on the black, I got started on the masking.
This is a super simple paint scheme, just red and black.  The trick to masking is to put on a TV show that you can binge watch while cutting small strips of tape and masking your project.  You don't need to measure, just cut small pieces and start applying the tape.  In a short time, everything is masked. 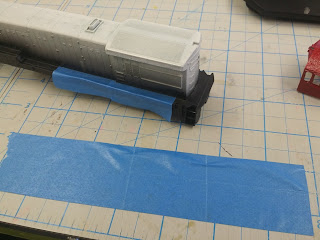 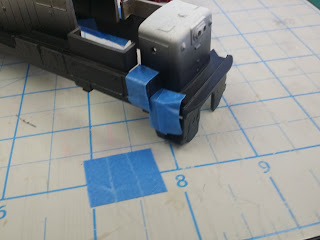 Check this out:  just some small random sized strips stuck everywhere I wanted to avoid paint.  I didn't really measure, but I did use my steel ruler to cut some straight lines to save tape.  I use tape from the auto parts store because it does a much better job.  There is a green and an orange tape for detail work that does very well.  There are 2 kinds of blue tape and one of them is super thin and doesn't stick very well.  Beware large sections of green or orange tape because it can pull the paint off from underneath it. 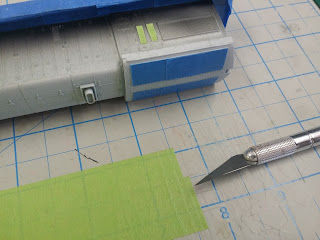 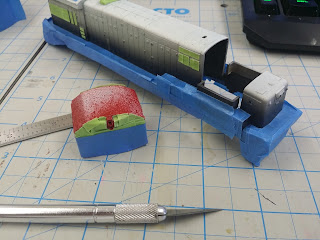 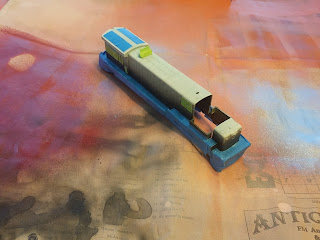 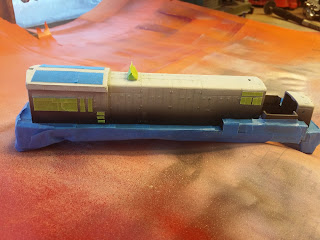 Now let's paint some Rustoleum Sunburst Red from a can that was about $6.  I cut it with 2/3 lacquer thinner and again do 100psi.  Lacquer thinner is one of the best secrets to learn in airbrushing.

The cab gets a silver roof and then to bake it under a heat lamp for a few hours.  This red I'll also leave overnight just to make sure. 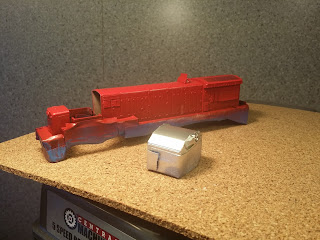 The next day, the tape comes off and we can do a little flat black work on the grills: 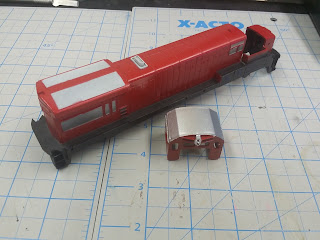 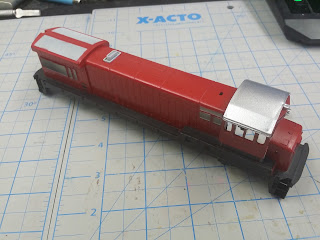 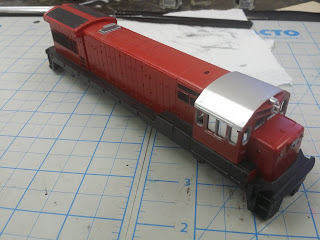 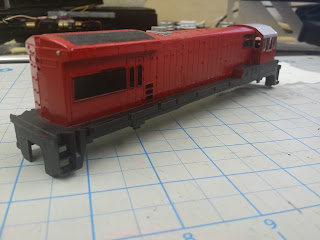 And we can start doing a bit of my favorite 1 color weathering, which I'll go into detail later.... 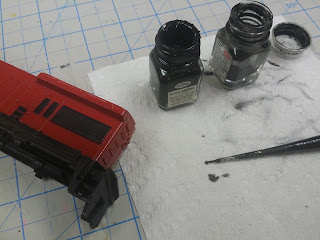