I was working on a Piko BR 86 that had a worn out idler gear.  The locomotive could run forward, but not backward.  Upon inspection of the gear I observed that the teeth were worn away on the side engaged when going in reverse.

I researched everything I could find about methods used to repair, remake and fabricate gears.  I learned a lot and chose to try a method where I would use baking soda and super glue.  When mixed, these two products make a very hard cement like substance.

My plan was to carefully wrap the gear with foil and then apple the baking soda and super glue to the gaps.

Once I had the foil on I noticed that it was a lot more durable than I expected.  The method of making the foil fit the gear is to turn it with its mate.  While doing this I noticed that it actually worked pretty good.  There's a few rips and tears, but they don't matter because the gear is just slightly bigger now making for a deeper mate with the worm gear.

Another benefit is the fact that the torque of the metal worm gear is applied to another metal surface making for a smoother working part.  So I just added a couple drops of superglue to hold it in place and it works pretty good.  When it finally wears out, it's easily replaced. 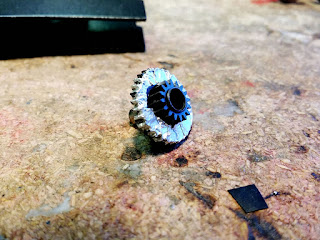